one needs to find relief from the stress of it all in any way that works. this is how april does it. she is a writer. she can’t stop herself from writing all day long. for your entertainment, here is the imaginery dialogue she wrote about 2 of her favorite doctors, rdf and gnfn.  (the shoes are real)

RDF: Gene, the girls are picking on the shoes I wore to the meeting!  I told them they were not sneakers, they were shoes.

GNFN: Richard, they were sneakers.   You can’t possibly be upset about this.

RDF: But April Smith put up a picture on her facebook with the sneakers and her mother-in-law (who isn’t really her mother-in-law but I don’t understand it all) says that only an elderly person would wear those shoes in 1985!

RDF: All the kids are doing it these days.  Anyway, do you think my shoes were bad?

GNFN: Well, they were sneakers, but I was wearing sneakers too.  However, I can do that because I’m a doctor, and everyone knows that doctors wear sneakers.  We have to so that we can move quickly from place to place, treating the sick. You know, like when I had to do something about Dr. Bernstein having a hypoglycemic crisis on the meeting floor.  Yeah, you owe me for that one.

RDF: I owe you!  I was the one who had to give my talk while the entire audience was watching you and that nurse (who the hell was she anyway?) try to revive Bernstein!  I had to hold the meeting together!

RDF: You’re right Gene.  Another day of our oppression at the hands of the lipophobes!

GNFN: Oh Richard, you’re being dramatic again.  You don’t need a conspiracy theory to explain all of this.  These guys believe what they believe and they fund their friends and they self-perpetuate and…

RDF: There you go, being the nice one again.  I should have named the Fine Tuning Committee after you

GNFN: Richard, you did name the Fine Tuning Committee after me.  You just don’t remember it!

RDF:  Oh yeah right… well okay… you hang in there… (hangs up phone.) 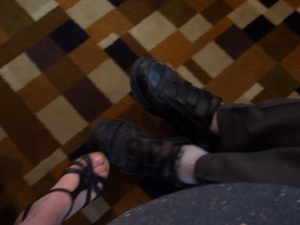 here are the actual sneakers.

“Before the beginning of great brilliance, there must be chaos. Before a brilliant person begins something great, they must look foolish in the crowd.”
– unknown