this bedbug thing is starting to get a little scary.  it was just about a year ago i told you about the  5th floor bedbugs in my building.  today, according to the post;

“the Metropolitan Opera House, Empire State Building, Carnegie Hall and other landmarks, the UN is now playing host to bedbugs.

The creatures were first found there in May 2009, and, while fumigation solved the problem, the insects returned this month, an official confirmed yesterday.

Meanwhile, city Housing Authority cleaner Miriam Ortiz, 36, was charged with arson for allegedly setting fire to a bedbug-infested mattress in a 10th-floor hallway of the Manhattanville Houses.”

it’s just good to know that someone is taking action.

“If we all just had compassion with action, it would be a beautiful world.”
– Ellie Pigman

the price of beauty 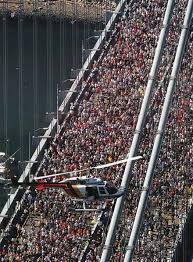 this guy is probably happy to pay $13.00 to cross the bridge.  i can’t imagine under what circumstance someone would have the thought that they would like to have the verrazano bridge tattooed onto their back.  i bet he lives on staten island. 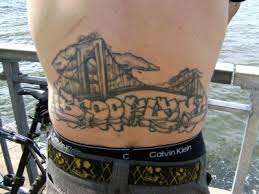 the post announced the toll hike today and i scrolled down to the comment section – which i always avoid because they can be pretty rancid. . . but i was curious about people’s reaction to the toll hikes.  i found this comment which made it completely worth scanning through the usual trash people spew in that section:

“And, it’ll only go higher again next year.
Will the last sane person leaving NY please turn off the lights.”

“Grant that I may become beautiful in my soul within, and that all my external possessions may be in harmony with my inner self. May I consider the wise to be rich, and may I have such riches as only a person of self-restraint can bear or endure.”
– Plato

A pudgy, fanny-pack-wearing 40-year-old man who lives with his mother is so desperate to find love, he’s posting handwritten personal ads at payphones around the city.

On paper, Malik Turner sounds like a fairly eligible bachelor — at first: He’s single, gainfully employed as a “sorter/bagger” for the United Parcel Service, loves the color red, roots for the Rangers and Jets.

“I go to nightclubs, but it’s hard for me to find a woman of my own. I talk to them, dance with them, but sometimes I don’t get their cellphone numbers,” he said.
hard to imagine. . .  here is malik:

if you match his requirements, please see flyer above for his contact information – and good luck to all.

*
“Nothing defines humans better than their willingness to do irrational things in the pursuit of phenomenally unlikely payoffs. This is the principle behind lotteries, dating, and religion.”

this has been bugging me for a long time now & i’m open to suggestions that may resolve this conflict.  other than truly obvious exaggerations which i often use,  i try to be truthful.  by obvious exaggerations i mean saying things like, “i have a million things to do”  or,  “i feel like my head is going to explode” – you know, the silly things you say that you don’t expect people to believe.  at least i don’t think anyone ever took the exploding head scenario too seriously.  anyway, ever since i attended a seminar in 2000 where they made a point of pointing out how people often dishonor agreements (lie) no matter how small or seemingly insignificant, it has an effect on your integrity, i’ve been uber aware of my words.  that’s not to say i’ve been impeccable with my words, but aware.  i catch the lies. it’s mostly small stuff like when i tell myself i will not go to quick mart anymore for that chemical cappuccino that i love so much, and then i find myself driving to quick mart.  but i am conscious of the lie.   as far as knowingly speaking untruthfully to another person, well that’s a rare occasion that generally only occurs when i don’t have the presence to gracefully not answer a question they have asked when it would not be so kind to tell the truth.  but i have been diligently working on that for several years and improving my diplomacy skills while remaining truthful most of the time.

here’s the dilemma.  often times when you join a website, download stuff or upgrade software on the internet, an annoying little box pops up and asks you to check a box indicating that you have read and understand the terms of agreement.  there have been times i have actually clicked on the terms link only to find many paragraphs of legalese  – there have even been a couple of occasions when i read it.  but usually i don’t bother to look and i check the box that says i read & agree to the terms when i did not.  if i read and agreed to the terms on all of the webpages that i visit requiring me to check the box, i would have time for nothing else  – like eating or sleeping (possible obvious exaggeration).

i could stop using the internet all together in an effort to avoid this inner conflict, but that does not seem practical.  i may just have to take a speed reading class & give up eating.

“What would it be like to communicate from a part of your own self that is absolutely free from self-consciousness, that is fearless, uncorrupted, and passionately interested in the truth?”
– Andrew Cohen

even if you’ve seen this – it’s worth watching again.  laughing out loud is good.

“When a thing is funny, search it for a hidden truth.”
– George Bernard Shaw

if you missed it this saturday, be sure to go next year!

click on the picture below to see pictures from the
october 16th meditate nyc event.

“Meditation brings wisdom; lack of mediation leaves ignorance. Know well what leads you forward and what hold you back, and choose the path that leads to wisdom.”
– Buddha

this morning ivan took off into the woods after a rabbit. he emerged with a toasted coconut marshmallow on a stick.

it was a missed photo opportunity.

“They are not following dharma who resort to violence to achieve their purpose. But those who lead others through nonviolent means, knowing right and wrong, may be called guardians of the dharma.”
– Buddha

*
so much talent . .  and that goes for the person who put this footloose video together.  you just can’t watch this and not want to move.  i think i’ll close the blinds now and dance with the pussycat dolls.   i just bought their workout dvd yesterday.

“Let your life lightly dance on the edges of Time like dew on the tip of a leaf.”
– Rabindranath Tagore

hillbilly comes out of the closet!

i try not to follow politics.  this is why:

Carl Paladino got back to the pressing issues facing the state yesterday — like accusing gubernatorial rival Andrew Cuomo of being a bad father for taking his daughters to the Gay Pride Parade.

Paladino, who has insisted that a candidate’s kids — including his own 10-year-old daughter out of wedlock — should be off limits in political contests, attacked Cuomo for taking his young girls to the city’s gay parade last summer. . . .

Speaking before a Brooklyn Hasidic congregation on Sunday, Paladino had said children shouldn’t be “brainwashed into thinking that homosexuality is an equally valid and successful option.”

where is this guy from? did he have a brain hemorrhage?  did he forget where he is running for governor??  someone needs to let him know he’s not in kansas anymore!  oy vey . . . .

“Prejudice, not being founded on reason, cannot be removed by argument”
– Samuel Johnson

recently i was behind a pickup truck with a big trailer attached.  it was all over the road. in an attempt to get far away from it, i passed it.  the girl driving it looked to be about 18 to  20 years old. she was texting.

“It’s like Russian roulette every time you pick up your phone in the car,”
– Oprah Winfrey

recently i’ve been on a quest to figure out just how i can earn more money – a lot more money – without getting a new job.  it’s practically been an obsession.  i just put it out to the universe & promised to be open to what ever answer it provided.  i wasn’t expecting it to be front page news in the post, but today when i looked – there it was. right on the front page of the post!  and the universe is funny. . . it always provides me with the least likely answer i would have guessed.  so, although it’s kind of strange, it seems much easier than the answers i had been rolling around in my brain.   starting today i will become a serial faster.  at least until i’m 60 lbs below average.  i’d say that’s an easy way to get a $22,300 raise.

A new study has found that skinny women make significantly more money than those who are of average weight or classified as obese.

The report, published in the Journal of Applied Psychology, found that looking like you’ve never eaten a hamburger in your life is one way to crack the glass ceiling. . . .

While women were rewarded for being thin, shockingly, the standards for men were just the opposite.

Even being obese hardly hurts a man’s pay, the study found. Men who were 60 pounds overweight make $14,889 more per year than their average-weight peers.  Read more

i am so skipping lunch today. dinner too.  and i’m joining match again.  in the “looking for” section, i will select over weight & obese as ‘must haves’.

“To be nobody but yourself in a world that’s doing its best to make you somebody else, is to fight the hardest battle you are ever going to fight. Never stop fighting.”
– e.e. cummings

this morning when i woke up i could clearly see the big dipper.  bright stars  like it was midnight.  then i had to find socks and a sweatshirt immediately – and that is with the heat on in the apartment.  lights were necessary just to make my way to the kitchen for coffee.  my zafu is leaking buckwheat hulls and according to the post,  the waldorf has bedbugs!

“Nothing is so bitter that a calm mind cannot find comfort in it.”
–Seneca

“Fate, is an excuse for why we end up where we do. Our actions predetermine our destiny, our reactions seal that fate.”

fun in the car

waiting in line at the holland tunnel today i got some good shots  (not to mention some really weird looks from the people watching me).

“The highest form of ignorance is when you reject something you don’t know anything about.”
– Wayne Dyer