it’s one of the few things that you actually pay less for in the city than anywhere else – a mani-pedi.   it would be hard to travel more than a block or two without passing a nail salon.  most are run by koreans.   unless you’re very wealthy and regularly frequent a real spa,  if you live in the city, you’ve most likely visited a korean nail salon. they’re fast, inexpensive and they do a great job.  but it’s no secret it can be a slightly uncomfortable experience – one of those things you just chalk up to city living. . . .

unless you’ve been living under a rock, you’ve probably seen the hilarious seinfeld episode where elaine is convinced that the korean staff is making fun of her every time they speak in korean (if not, i’ve posted it below).  going to a nail salon is never really an entirely relaxing experience –  until you reach the point that you just don’t care anymore that the entire staff is speaking korean, laughing and looking up at you on occasion.  it’s just not fun – but you know it’s the price you must pay for a fabulous set of french gel tips.

i’m staying at my friend tracey’s place on 52nd street just in case an ad for a fabulous apartment pops up on craigslist and i must run over to see it before anyone else gets to it.  i haven’t had a proper manicure since i left nyc and it is one of the many things i look forward to doing regularly as soon as i can secure a place to live.  there is a nail salon right on the corner of 52nd and first and it’s open until 10:00 pm. (another plus only found in the city).  a nice gel manicure is in order.

one of the things i really dislike in most cases is entering a new salon.  every one of the staff will divert their attention from the customer they are working on, look up at you & yell “hello” with a big fake smile.  in most cases there is no one at the reception desk so you are left just standing in the entrance with all eyes on you, not knowing what to do next.  this didn’t happen at apple blossom nail spa.  i’ll try not to make this sound like an ad for the place but i have to say, it was awesome, inexpensive, exceptionally friendly and if it’s at all possible, this is where you should go!

when i walked in, ‘andrew’, the owner was standing at the reception desk and actually welcomed me in. he was kind and sweet and just had great energy.  a gel manicure was only $35 and ‘jenny’ (andrew’s incredibly sweet wife & co-owner)  said she could mix a custom color from any of the available gel colors.  several minutes into the manicure an angel named rosa appeared and gave me a heavenly free neck and shoulder massage until my manicure was complete. as per most nail salons the owners were from korea and the staff spoke either korean or spanish – but not to eachother in front of the customers!  in perfect english, jenny asked if i lived in the neighborhood.  i explained to her that i was in search of an apartment and we talked about the ny rental market.  as we spoke, a customer  named roberta came in.  she was a regular & everyone seemed to know her. turns out roberta is a real estate broker for douglas elliman so they called her over to see if she could help with my apartment search.  so there i sat getting a manicure, a free massage and a real estate consultation –  that’s service!  the atmosphere in apple blossom salon was so nice, i really didn’t want to leave when my custom color mix gel manicure was done.  i stayed for a 10 minute chair massage by alva – which was so amazing i had to extend to 20 minutes.  another great value – $12 for a massage that eliminates every ache and pain from schlepping around the city all day with a 25lb back pack.  but then it got even better –  when i was getting paying my bill, along with my change andy gave me a gift certificate for a free pedicure!  after that i told andy i was going to tell everyone about apple blossom nail spa and even write about it on my blog. no matter what neighborhood i end up living in, i will be a regular at apple blossom.   i give it 5 stars & recommend you go and check it out!   🙂 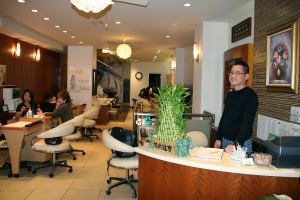 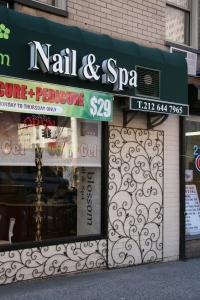 “For today and its blessings, I owe the world an attitude of gratitude.”
– unknown

One response to “zen in nyc nail salon?”