september 11th in the city

cloudy with possible showers forcasted for today – and even a bit chilly.  almost the opposite of 9/11 ten years ago.

i’m sitting on a park bench in cps near the intersection of 59th street & 7th ave.
after meditation  and a great dharma talk by rev. lee,  i  stopped back home and made some fresh pineapple-mango-kale  juice, packed  my nap sack with everything i may need if i don’t come home until late this evening and went out for today’s adventure.  my plan is to visit as many memorial events as possible today beginning with the fireman’s memorial service at  st. pats.   according to some calendar of 9/11 events i found on the net  there was a service scheduled for the first responders.  i arrived on time but there was no special service.  st. pats security said they changed it at the last minute to yesterday.  seems weird. how would they possibly get in touch with the people who made plans to be there?  i didn’t bother to go in because i didn’t want to unload my napsack for the standard search.   i wonder how many churches across america search your belongings prior to granting entry?

flashing lights from a stream of police cars  caught my eye so i crossed fifth ave to investigate.  as i got closer i noticed a bride standing in the street next to the police cars and a bunch of people crawling around on the ground apparently looking for something very small.   a crowd of on-lookers obstructed my view and by the time i got there, the bride had vanished from my sight.  this was the second missed photo op of the day.  a rather strange scene indeed.

one of the on-lookers gave me the scoop on  the bride and the 5 police cars although she did not know what all of the people crawling in the middle of 50th street were looking for.  two people got married and had  5 cars decorated in honor of the people who lost their lives ten years ago in the terrorist attacks on 9/11.  the names of each of the victims were listed on the cars.  it was challenging to get pictures at all, due to the number of onlookers and street crawlers,  but i did manage to get a few clear shots.

in the shot below you can see one of the crawlers.  the rest were on the other side out in the middle of the street. 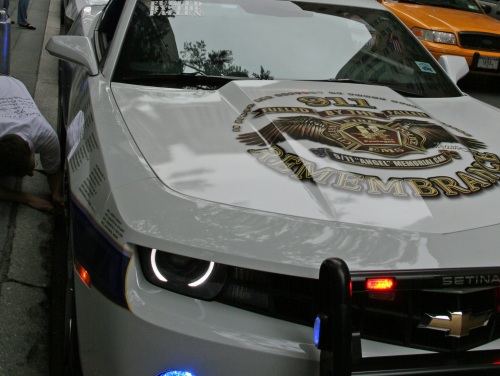 i interrupt this story to tell you i just saw a horse trip while pulling a carraige of tourists through the park.  he recovered his footing quickly and appears to be fine, but i’ve just never seen that before.

other than the weird wedding and the street  crawlers, there wasn’t much going on at rock center so i headed towards the west side.  i had no particular plans since i was supposed to be at the memorial service at st. patricks cathedral until 4:15.

i asked a couple of street cops where to go and they told me fox news was hosting a concert by the us marines over on 7th ave.  i continued west & when i saw the bus i knew i was in the right place, but i couldn’t find the marines which was a grim reminder of the hordes of sailors who evaded me during fleet week.

*
the marines were being filmed by fox and used as filler segments during their coverage down at ground zero.   i didn’t have to wait long before they emerged from the bus.  they had taken a short break to go inside the bus and say the pledge of allegiance.  really.  these marines were based out of north carolina and were in the city for a few days playing at various events remembering 9/11 this weekend.   the marine in charge wasn’t actually in the band so once he got the guys set up to play, he hung out with me and answered a million questions i had about being in the service during war time. 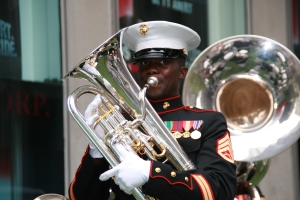 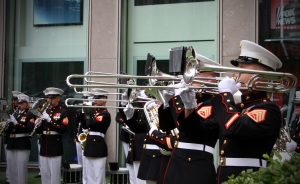 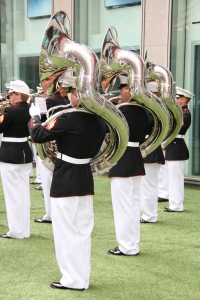 *
you gotta love a marching band – but the truth is, there’s only so long you can listen,  or is that just me?  columbus circle was next on my list although there was nothing going on when i got there.  from there i wandered into the park & that’s how i ended up on this bench.     lincoln center at 7:30.

“I’m gonna share with you a vision that I had, cause I love you. And you feel it. You know all that money we spend on nuclear weapons and defense each year, trillions of dollars, correct? Instead — just play with this — if we spent that money feeding and clothing the poor of the world — and it would pay for it many times over, not one human being excluded — we can explore space together, both inner and outer, forever in peace.”
– Bill Hicks