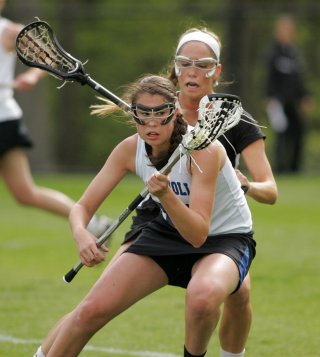 CLARK, NJ –♥ Claire Cagnassola ♥ led the Oak Knoll Rams with four goals including what proved to be the game winner with 3:14 left in the second half

♥ Cagnassola ♥ was able to tie the game at ten apiece when the offense held possession for a few minutes before she found an open lane, drove and buried the ball into the back of the cage. . .

That stop led to an Oak Knoll clear and from there ♥ Cagnassola ♥ would take care of the rest.  Again with her squad maintaining some quality possession in the offensive zone, Kent Place was eventually called for a loose ball penalty, thus awarding her a free try.

♥ Cagnassola ♥ calmly stepped into the left slot and rifled a low shot in to give Oak Knoll the lead for good at 11-10.

“I have a lot of trouble with free position shots… so I got really nervous,”
♥ Cagnassola ♥ said after the game.  “I’ve been working on them a lot lately and I just thought where to place it.  I usually bounce it in between the goalies legs and that’s kind of what I did,” she added.

one day in the not too far future, when she is world famous, i will  be able to say i knew her when . . .

” The path to success is to take massive, determined action.”
– Anthony Robbins