a day in the park

once again with no plans for the weekend, all of the locals gone to their summer retreats, i thank god i live in the city.  where else can you do so much with no money when you have nothing to do?  in nyc i can just pick a neighborhood, head out with my camera and be busy and entertained for the day.  this sunday, central park was my playground.

before i even made it into the park, i spotted this amazing 1956 desoto parked in front of the plaza: 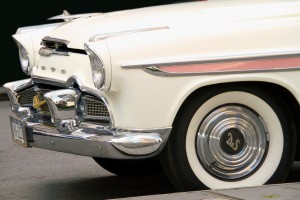 i sat on the fountain wall for 30 minutes or so just watching all the people ogling   the car while it’s owner answered all of their questions.  almost everyone asked if the could sit inside and have their picture taken. the car’s owner, morgan denied them permission to get into his prized possession, but was happy to  take their picture next to his car.

from a stretch hummer limo that pulled up in front of the plaza emerged an entire clan of 13 year old boys celebrating a bar mitzvah.  rather than going into the hotel they headed right for the desoto. 🙂

even on his big day, morgan did not let the bar mitzvah boy get into the car but did offer to take his picture standing next to the car.  the boy seemed happy and posed as all of his friends looked on with envy. 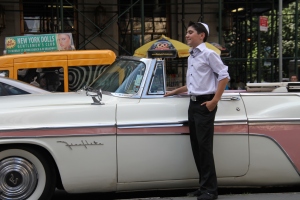 after about 15 minutes of observing morgan and the tourists, i learned everything there is to know about  1956 desotos.  morgan saw me taking pictures of his car from the sidelines and i suppose he was curious as to why i wasn’t bombarding him with questions like the dozens of other people who surrounded him.  he left his posse and walked over to me and began to ask me questions . . .

my brain was  filled to the brim with desoto facts by this time and so morgan was compelled to pull out the big guns to impress me –  at which point he asked me to accompany him over to the car.  he opened the biggest trunk i ever saw, which was filled with desoto paraphernalia that he rifled through untl he found what he was looking for – the original ads for the ’56 desoto. “have you ever seen any of these?” he asked.

after showing me all of the advertisements, i admitted to morgan that i had indeed never seen any of those ads before.   morgan then looked at my camera and asked me if i would like him to take a picture of me inside his car – i agreed.

onward to the park:

i stopped to pet 3 carriage horses at the traffic circle where there was a very loud, very angry carriage horse protest taking place.  i proceeded into central park for a few wild life photo ops.

i listened to some amazing music,

ran into andy golub  painting one of his many naked models, 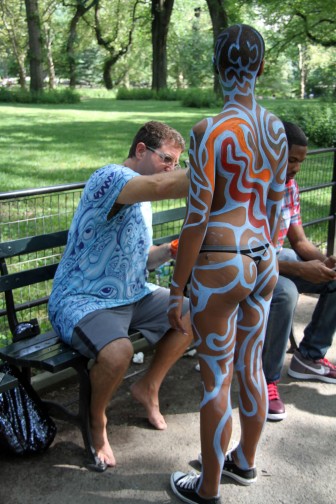 watched lots of amazing street dancing by some of ny’s most talented, 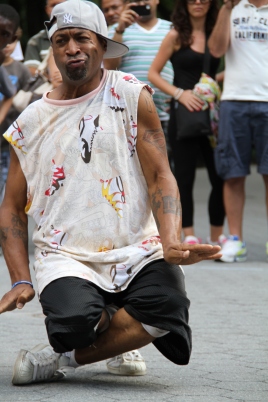 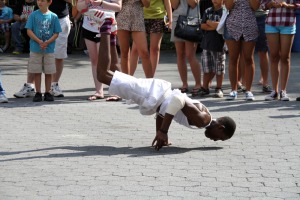 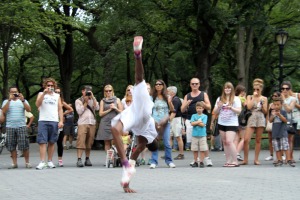 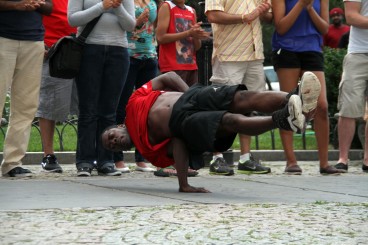 i considered going to summer stage to see salt-n-pepa but the line was outrageous. i  sat  on a bench & listened and just imagined what they looked like on the stage.

all people to the left of the roadway are in line for the free concert ( ERIC BENET / SALT-N-PEPA / CHRISTOPHER WILLIAMS / KENNY LATTIMORE / Q PARKER / DJ DWIZ) which was already well underway.

i watched people of all kinds  –  doing their thing: 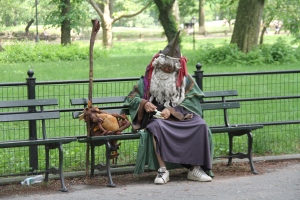 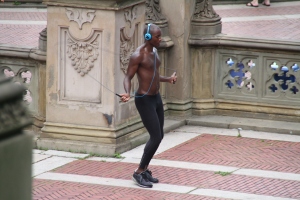 and then did a bit of window shopping on the walk back home: 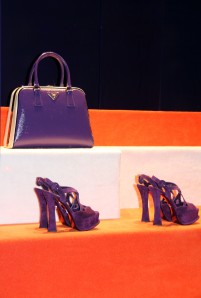 when i arrived back home, i fell onto the couch and wondered why there was no one here to walk the dog and cook dinner for me.

“All alone!
Whether you like it or not,
alone is something you’ll
be quite a lot”
~ Dr. Seuss

8 responses to “a day in the park”