try not to laugh

i saw this story in the post yesterday and it made me laugh so hard i think i read it 3 times.  i guess the post peeps liked it too because they ran it again today.

An elderly parishioner’s attempt to touch up this cherished but deteriorating Spanish church fresco has turned Jesus into a cartoon figure.

The unidentified woman, in her 80s, was upset at the damage that moisture was wreaking on the 19th century fresco in the Sanctuary of Mercy Church near Zaragoza.

Without authorization, the devoted woman scraped away some of the paint, leaving white marks on the wall.

Then she took out a paintbrush and replaced the strokes of artist Elias Garcia Martinez with her own, Spanish media reported.

When she realized how badly it had turned out, she contacted the city’s culture councilor, Juan Maria Ojeda.

“I think she had good intentions,” Ojeda was quoted as saying.

As it turns out, the woman’s efforts weren’t even necessary. An organization that restores Spanish artwork, El Centro de Estudios Borjanos, had just received a donation from Martinez’s granddaughter to repair the damage done by the moisture.

Ojeda said art experts are trying to determine whether the woman’s work can be undone.

“If we can’t fix it, we will probably cover the wall with a photo of the painting,” he said

[after the touch up] 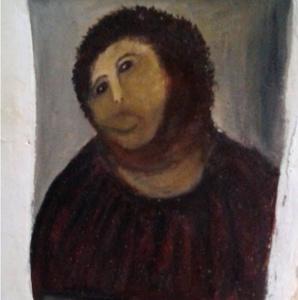 17 responses to “try not to laugh”