unofficial rules of holiday shopping in the city

it’s tourist season and midtown is over flowing with shoppers, sight-seers, celebrity seekers and tree gazers! 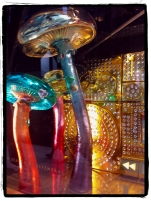 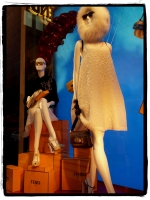 it’s a good thing for the city – not so much for the residents.  from december through january things become all discombobulated for the locals because tourists disrupt the flow.  it’s nothing that can’t be fixed and it’s not even their fault. they are simply unaware of a few simple things. when travelling into the city, i’ve noticed that at the bridge & tunnel tolls, it’s always the cars with out of state plates in the ‘cash only’ lanes – the regulars have ez-pass.  i’m thinking that a small list of “instructions” printed on the back of the bridge & tunnel receipts would be a great invention because it could list the rules and then they would know.   since that’s not the case, i will post them here.

crossing the street in midtown is similar to participating in a game of football. there are two sides, face to face, waiting for the ‘go ahead.’ the difference is that in midtown, each team has anywhere from 25 – 50 people on each side where in football, there are only 11 on each side.  during the months of february through november, when the light says walk, the ‘teams’ advance towards each other and effortlessly manage to get to the other side of the street without knocking into anyone. they’re used to it; they don’t get nervous and foot traffic just flows. on the other hand, in december and january,  i believe that during the 2-3 minute wait between light changes, tourists get super focused on the opposing team which makes them nervous.  their brain begins to wonder how they will manage to cross the street through all those people about to charge towards them, and they begin to map out a strategy.  as soon as the light changes, they follow their mind map.  because they could never predict the mind maps of the opposing team, it turns into a giant cluster of frustrated people bumping into each other, scared they will never reach the other side safely. weird but true.

when you see a pretty store window, something shiny that catches your eye or a homeless person, do not just stop in the middle of the sidewalk.  this causes mid-sidewalk collisions and then you leave the city thinking ny’ers are rude.

wear your comfy flat walking shoes or you will regret it.  and know that the people in the flat comfy walking shoes are the ones who must walk on the grates. women in heels have the right of way on the sidewalk whenever a grate presents itself.  there is no need to worry about falling through the grates and landing in the pathway of an oncoming subway, seriously.

It is a man’s own mind, not his enemy or foe, that lures him to evil ways.
~ Buddha

One response to “unofficial rules of holiday shopping in the city”