menu men are god’s way of testing me. i have never come close to passing the test. menu men can un-do an entire hour of meditation in the mere second it takes for them to slip a menu under my door. menu men slither through the streets at all hours and littering the door steps with piles of menus. sometimes i follow them, collect the menus, rip them in half and hand them to the guy when he reaches the end of the block.  they are vandals. they are degenerate litterbugs and they push every button of mine.

who are these guys? and why are they allowed to litter in my apartment? i can just imagine the ad they answered to secure this type of employment: ex-cons with lock picking experience welcome. willingness to lurk in alleyways without being noticed for long periods of time. able to defend self against occassional physical attacks by middle income, non-doorman living new yorkers who are fed up with garbage being slid into apartment.  no familiarity with the english langauge required.

and then there’s tony alamo. the tony alamo is a bible belting christian fanatical organization headquartered in texas (surprise) that liters the streets with flyers that state “this literature carries the true plan of salvation – do not throw it away” wtf?  the brainwashed disciples of this cult are the worst. they infest the streets with their trash about once a month. They place a newsletter on every parked car along the street, on bikes, doorsteps and stuffed in between the bars on gates along the block. of course when the people come for their cars, they remove the newsletter from under the windsheild wiper and throw it on the floor. the tony alamo trash surfaces for 2 weeks afterwards all along the streets and sidewalks.  I wrote to the mayor once to report them. it was the first time i had ever written a complaint letter to anyone. the result? two uniformed garbage police showed up at my door at 8:15 am one morning to assure me they were going to take care of it.

the following week the alamo cult members had come back to deliver their trash. they were here again yesterday. this time i have a better plan. i went outside and took pictures of the block – the cars, the sidewalks and the gates all littered with tony’s trash. i then collected all of the newsletters from the car windshields and the street. i will send the mayor a letter today along with photos of 73rd street and my collection of tony alamo brochures. i retrieved all of the menu’s i found on the sidewalk at the same time. i will include the menus with my second letter to the mayor. i will send the garbage to him on 79th street where he lives.   i never saw a menu or a tony alamo newsletter anywhere near his residence. why is this ok for 73rd street but not 79th street? i will ask him that in my letter. 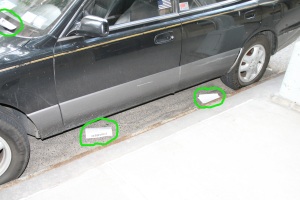 “when you hold resentment toward another, you are bound to that person or condition by an emotional link that is stronger than steel. forgiveness is the only way to dissolve that link and get free.”
– catherine ponder