a ganesh of my own

ever since i found out that ganesh was the lord of beginnings and remover of obstacles, i’ve been on the lookout for a ganesh of my own.  luckily, while walking down macdougal street i stopped in to nepa bhon. the owner of nepa bhon is a beautiful woman from nepal – a very old soul whose wisdom and radiance are palpable.  she told me that most of the items in her store were manufactured in her family home in nepal and if i had any questions about any of the items in the store she would be happy to tell me about them. 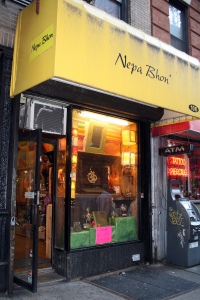 i told her i had come for ganesh and found just the one i was looking for.  i asked the woman if she would rub his belly or do whatever needed to be done to activate my ganesh to remove the abundant obstacles that i’ve been attracting in my world. . . she just smiled and told me he will really work – not to worry.
he was perfect – just sitting there on the shelf waiting for me to take him home – so i did. actually i’ve been taking him everywhere. i took him to johns on bleeker for some pizza, we went to pinkberry together and just last night we went for a long drive in the country. i could tell right away he was working already – when we got to pinkberry and i discovered they’ve added ‘chocolate’ to their list of yogurt flavors!

of course i share  ganesh with ivan, due to the health obstacles he’s been experiencing the last couple of months, and i believe they’ve become good friends.  here they are on ivan’s yoga mat sharing some quality silence together. 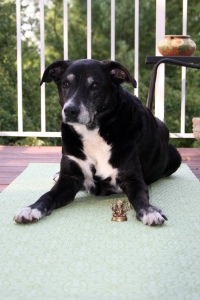 this morning ganesh is sitting on my computer, removing obstacles while i enjoy my coffee. 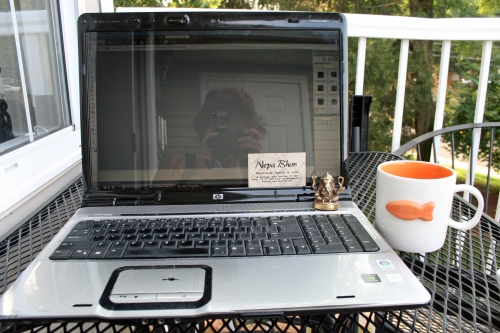 later, i think we’ll go to the pool.

“Nobody can go back and start a new beginning, but anyone can start today and make a new ending.”
–  Maria Robinson